At the end of November I took a little pre-christmas trip back to Norfolk.  Whilst I was there my brother took me on a little trip around Norwich, somewhere that I haven't really been to for years, and it was lovely.  I studied in Norwich and I used to spend a lot of time wandering around there.  It's a perfect size to do just that as it's not that big and it has some really pretty areas.  I forgot how lovely it is.  I had in my head the idea to create some sort of map based on the walk.  It's something I've wanted to do for a while now and a bit of a departure from the kind of subjects I normally choose to illustrate.  So this is the result of that.  Following the little brown dots is the simplified route that we took.  From the Britons Arms we went up through the the cobbled streets of Elm hill, round by the river (with some lovely willow trees on the way), past Cow Tower and Pull's Ferry, up near the Cathedral and on into the main part of the City, (no doubt for some more food!) finally ending up at the Castle Museum.  By the way we did have some really lovely cake in the Britons Arms, somewhere unbelievably I don't think I've ever been!  It was a cold day and when we opened the door and saw the open fire it was a real delight, and then the cake arrived and perhaps the biggest coffee I've ever seen........yum!

I've done a couple of crops so it's possible to see some areas in a little more detail. 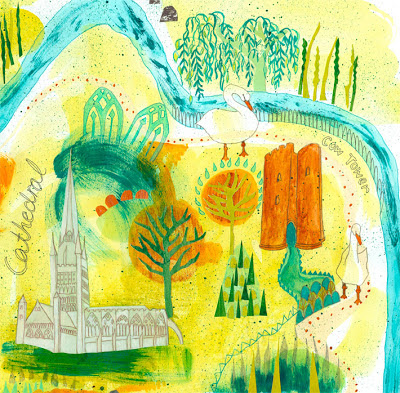 Here's a couple of photos I took whilst wandering also.  This is the inside of Cow Tower, a historic military tower built in the 14th century.  It was sunny at this point, so I like that little streak of sunlight on the brickwork.

That's it for now.  I think Norwich is a lovely place to walk around and worth a visit if you get the chance!  Bye for now
Posted by Sharon Farrow at 10:15 No comments:

Just a very quick post to show some work I did over the weekend for Amelia's Magazine.  The illustration was for Martina Spetlova's S/S 2013 collection.  In the end I decided to illustrate this dress as I loved the fan-like pleats.
It was a very snowy weekend here in London so it was nice to be warm indoors painting!
Anyway for now that's it, I should be back soon with a longer post about the other things I have been working on recently so bye for now!

Posted by Sharon Farrow at 13:27 No comments: