I'm back once more with all things London (again).  I love creating maps of anywhere really but it's always special when you feel you know the place.  I also really enjoy drawing London's iconic buildings and places.  I've drawn a lot of the ones shown here over and over again, and I never get tired of them.
For this illustration I was really strict with my colouring.  I wanted something really vibrant, and I'm really happy with the colour choices and the reduced palette.  Tombow and micron pens have become some of my favourite materials to work with alongside paints.  Tombows have amazing colours and coverage and microns give a lovely line and don't bleed which is perfect for my way of working.
I definitely want to make more maps.  They're challenging but so enjoyable to work on. 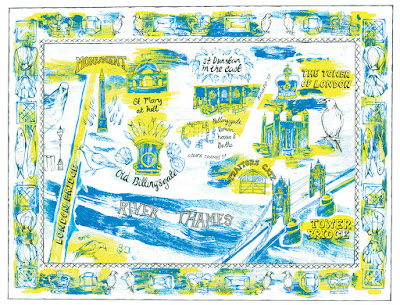 Right back to work, lots to do this week as I've got a couple of days break at the end in the countryside, so lots of lovely long walks in nature.  I can't wait :).
Posted by Sharon Farrow at 02:43 No comments:

I hope you've had a good start to....September!  I can't believe we are here already, the year is speeding past.
Today I'm sharing something I've been working on during these sunny days but which is on a wintry theme.  A while back I came across an article about 'London Frost Fairs' which took place on the river Thames when it..gasp! froze over.  Hard to imagine I know, but in those days the river was wider, slower flowing, and of course winters were much colder.  The last recorded fair was in 1814 and the best records are from the early 17th century.  The frost fairs were like parties on the ice, lots of games, food, drinks, King Charles II came to join in the fun at one of them, and there was even an elephant walking the ice at the final fair so the ice did get pretty thick.  There must have been a great sense of excitement and also quite a lot of risk I would imagine, as it could all end very suddenly.  My frost fair is based in the 17th century, I hope you can tell from the clothing and it meant I got to imagine my own version of the Old London Bridge which I wish I could have seen with all the buildings along it. 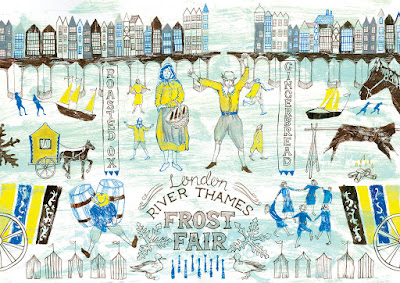 I did a lot of sketching beforehand then took copies and began to figure out the arrangement.  I find this is the best way for me to do it ;). 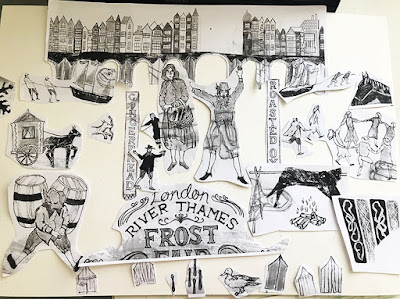 Just because I took a nice sunny walk along the Thames last week, here's a pic of the river as it is today!  It was such a beautiful afternoon :). 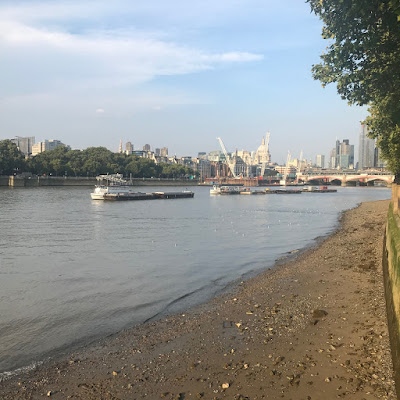 I hope you have a lovely start to the week, I'm off to start work on a new project and I'll be back soon!

Posted by Sharon Farrow at 02:01 No comments: